For anyone who wants to get rid of stubborn fats in their body but don’t want to undergo painful cosmetic surgical procedures, there are non-invasive alternatives that promise amazing results. One is CoolSculpting.

With more than 7,000,000 procedures performed worldwide, CoolSculpting is proven to be an effective and safe fat removal technique.

But how much does it cost? And is CoolSculpting really worth it?

This article covers everything you need to know about CoolSculpting, such as the costs, benefits, risks, and expected results.

CoolSculpting is a body contouring procedure that removes fat by freezing. During the procedure, the doctor uses thermal conduction to break down fat cells without causing damage to the underlying skin.

Unlike traditional fat removal methods, CoolSculpting is non-invasive which means it doesn’t involve surgery, cuts, or the use of anesthesia. It was first introduced in 2012 and recognized by the Food and Drug Administration (FDA) as a generally safe treatment.

How Does CoolSculpting Work? 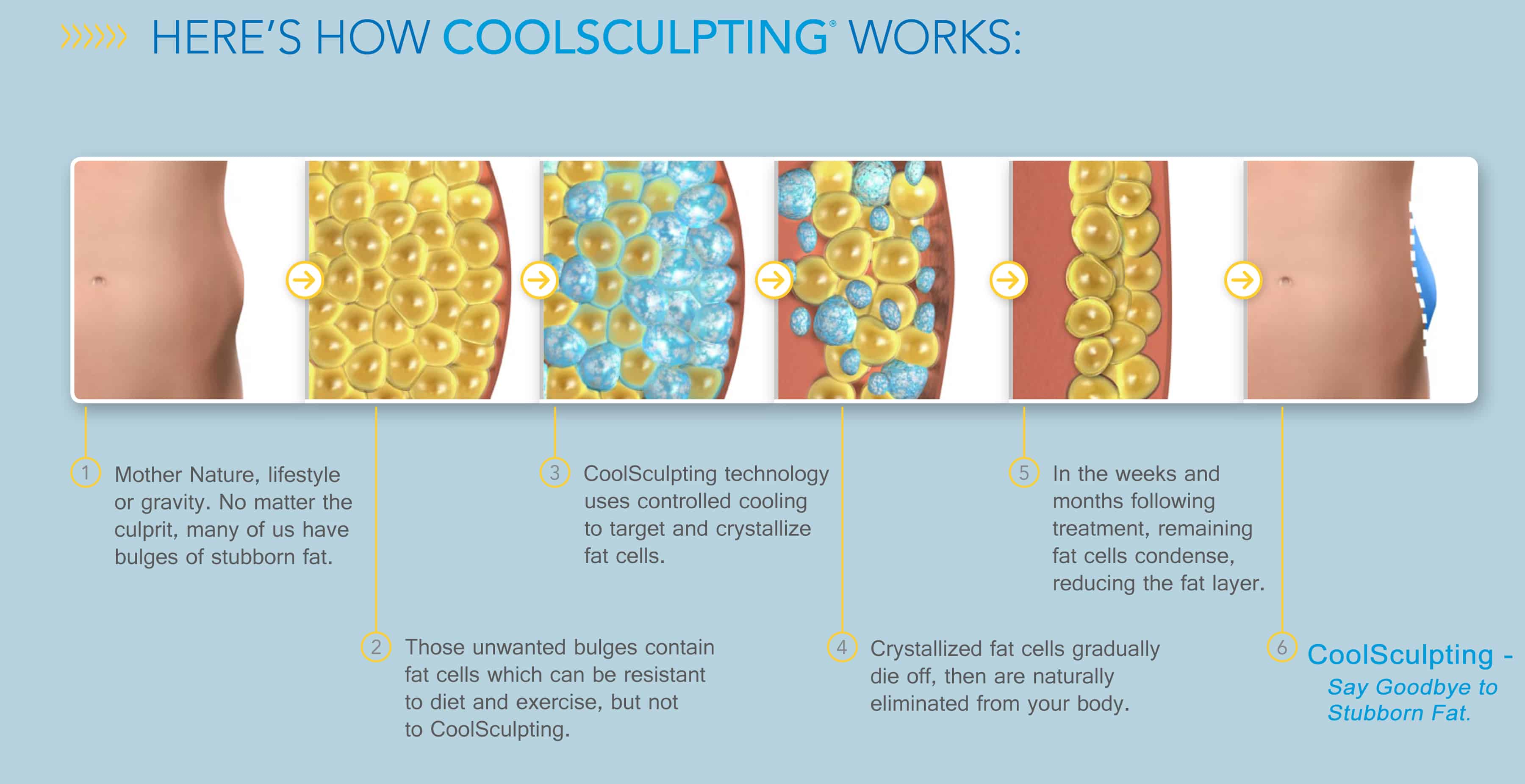 CoolSculpting or Cryolipolysis usually takes about an hour. During the procedure, the practitioner safely delivers precisely controlled temperature (ranging from -11 to +5 °C) on the target area. Treated fat cells are ‘frozen’ or crystallized, and eventually, die.

The freezing of fat cells is followed by an inflammatory response, which begins on the third day, peaking around the 14th day. The body naturally eliminates the dead fat cells, a process which might take up to three months.

CoolSculpting is performed using a device that pulls a piece of flesh between two paddles, cooling it below freezing point. Once the desired temperature is met, it is retained for half an hour or so.

While the entire procedure takes just about an hour, the result is unnoticed until after 2-3 months. You are also likely to experience mild discomfort from the suction and cooling sensations brought by the device. Eventually, the area will feel numb.

CoolSculpting is said to reduce about 20 to 25% of fat cells in a given treatment area.  Yes, it works but it usually takes several treatments to achieve your desired results. A study which appeared in the Aesthetic Surgery Journal found an average fat reduction of 19.55% on people who went through the procedure. Furthermore, a 2014 study, published in the Lasers in Surgery and Medicine, found an increased fat reduction two months after Cryolipolysis treatment.

While CoolSculpting can remove fats from certain areas in the body, it isn’t the magic bullet to weight loss. You cannot expect complete fat removal and it may take a few sessions before you achieve your desired result. Additionally, it cannot be used to tighten loose skin.

How Much Does CoolSculpting Cost?

With such substantial claims of success, CoolSculpting may sound like a very expensive treatment. Fortunately, as compared with other popular fat removal treatments like Vaser Lipo and SmartLipo, CoolSculpting costs are easier on the wallet.

CoolSculpting prices vary, depending on the number of treatments needed, the target body areas, and your body contouring goals. Yes, the procedure can be personalized to meet your fat removal needs. Your doctor will provide a customized treatment plan that’s tailored to your goals, body, and of course – budget.

Based on the 2017 Plastic Surgery Statistics, the average physician fee for CoolSculpting is $1,481. The typical cost for the entire treatment, however, is between $2,000 and $4,000, according to the official website of CoolSculpting.

In most cases, you will need one treatment session for a specific area in your body that you want fat cells to be removed. However, you may opt to have a few more sessions to achieve additional results after several months.

Cost of CoolSculpting for Arms

Many people turn to CoolSculpting to trim fats in their arms. The average cost for smaller areas like the arms is $650-800 per area.

That means for both your arms, expect to pay at least $1,300 for the procedure. The treatment session can last for about 35 minutes. Expect numbness in the affected area once the freezing temperature is applied. For smaller areas like the arms, one session of Cryolipolysis is enough to achieve your desired results.

Cost of CoolSculpting for Stomach

CoolSculpting prices for stomach is quite high due to the fact that the abdominal area usually has the most amount of fat cells. Additionally, it can also be difficult to remove fats around the midsection because of certain factors like age, pregnancy, or massive weight gain. On average, one CoolSculpting session for the stomach costs $1,500.

CoolSculpting prices for stomach are still relatively low compared with that of SmartLipo and liposuction which costs $5,000 and $3,374 respectively.

Cost of CoolSculpting for Thighs

For a slimmer, more toned thighs, expect to pay $750 for CoolSculpting for each inner thigh. In total, one treatment session should cost you $1,500. That’s not far from the Sono Bello cost for TriSculpt which is $1,395.

Cost of CoolSculpting for Belly

Similar to CoolSculpting treatments for stomach, the cost is around $1,500 per session. Most providers recommend two treatment sessions for better results but some people choose to undergo a few more treatments for ultimate results.

Cost of CoolSculpting for Chin

The chin may not be a large area but the cost is about $1,400. To achieve the best result, you may need another session. That is still low compared with Kybella. Kybella costs around $5,400 for three treatments (with each session 4-6 weeks apart).

Cost of CoolSculpting for Neck

The neck area is usually covered for CoolSculpting procedures for the chin, which is priced at $1,400, on average. The treatment normally lasts about 35 minutes and two sessions are likely needed to achieve better results.

Since everyone’s body type is different, most providers will require you to visit their clinics for a consultation, during which, they will provide you the cost estimate. They will have to assess your body so they can give you the most accurate CoolSculpting estimate.

Like most cosmetic treatments, CoolSculpting can be personalized to meet your body contouring goals and budget. Work with your provider to create the best treatment plan for you. Some providers like Sono Bello even offer flexible payment plans to help patients achieve their goals.

Customized CoolSculpting treatments cost anywhere from $2,000 to $4,000. It all depends on how much fat you have and how many areas you want to treat.

Is CoolSculpting Worth It?

It may not be as expensive as the traditional body contouring options, but CoolSculpting isn’t cheap either.

After knowing the average cost of CoolSculpting, you’re now wondering – is it worth it?

Let us look at the benefits of CoolSculpting.

CoolSculpting offers long-term results, although they may not be visible until after several weeks.

CoolSculpting Before & After: Stomach

CoolSculpting Before & After: Thighs

CoolSculpting Before & After: Chin

CoolSculpting Before & After: Neck

CoolSculpting Before & After: Arms

CoolSculpting Before & After: Belly

With over four million procedures performed worldwide each year, CoolSculpting is generally safe and effective. It has also received certifications from the U.S. Food and Drug Administration for being a safe medical treatment. According to a review published in the journal Plastic and Reconstructive Surgery, Cryolipolysis is a relatively safe treatment that provides significant fat reduction without major health risk factors.

You might experience discomfort only during the procedure. Since freezing temperature is applied to your skin, expect some painful sensation which declines gradually. You will also experience numbness in the treatment area.

Some people experience a bit of pain during the procedure. Initially, you will feel intense cold on the area being treated which soon dissipates, and feel numb (lasting 5-10 minutes). It may also feel like your skin is being pulled due to the suction applied. After the treatment, you may feel a tingling sensation as the treated area is massaged.

Recovery from this treatment is quick. You won’t also be restricted by your doctor to go back to work and other normal activities. However, immediately after the procedure, you might notice minor redness and swelling. It may also feel sore as if you’ve been bruised. After 3-5 days, these symptoms should subside.

Some common side effects of CoolSculpting are:

What do people say about CoolSculpting? Many of those who took the procedure are happy and satisfied with the results. Some didn’t experience pain (during and after treatments). Others did, along with numbness. Very few CoolSculpting reviews report pain and other side effects a year after the treatment.

Once the fat cells are destroyed, they won’t come back. They will be eliminated by the body and will be gone for good. In that respect, CoolSculpting offers permanent results. But in order to maintain the results achieved through CoolSculpting, you must stick to a healthy lifestyle.

How Long Does CoolSculpting Last?

CoolSculpting results should last indefinitely because the treatment is performed to kill fat cells. However, weight gain after the treatment can cause new fat cells to grow, thus, causing bulges or fat deposits to appear again.

CoolSculpting is a popular body contouring treatment that is performed all around the world. Since the device used to perform the procedure is designed and patented by ZELTIQ, you should expect the same results from certified CoolSculpting providers in your area. You can find a provider through the official CoolSculpting website and other accredited online directories.

Because not everyone can afford CoolSculpting, some people try to copy the procedure and perform it at home using ice and other frozen products.

Does DIY CoolSculpting Work & Is it Safe?

While DIY CoolSculpting sounds like a good idea, it is not recommended and could do more harm than good.

Cryolipolysis is a medical procedure which involves the use of a vacuum-like device that suctions out some frozen fat cells. This causes the fat cells to shrink and eventually die. Without this technology, applying ice or any frozen product on the skin only freezes it, and does not destroy the fat cells underneath.

You will find CoolSculpting machines available for home use. These products promise quality fat removal without the high price tag. However, note that CoolSculpting is a patented technology that is provided only by ZELTIQ. This FDA-approved is only available at authorized clinics.

There are, however, fat removal products for personal use that many people swear by. One is the Isavera fat-freezing wrap. Similar to CoolSculpting, it uses fat-freezing technology along with cold thermogenesis to target stubborn fats. It is also so simple to use. It comes with gel packs that you insert into the pockets of the wrap before wearing it around your waist.

Currently, CoolSculpting is the only fat removal technique that works by freezing fat cells. However, there are other non-invasive methods offered today, such as:

CoolSculpting is a groundbreaking technology which involves freezing fat cells throughout the body. It is a popular alternative to traditional surgical procedures like liposuction and tummy tuck and is proven to eliminate 20-25% of fat cells in a single treatment.

Compared to other fat removal methods, CoolSculpting costs are relatively lower. The prices depend on the number and extent of the target areas. Because everybody is different, CoolSculpting treatments are personalized.

There’s no doubt that CoolSculpting works. It is backed by research and many people swear by the promised results. Nonetheless, getting the treatment from a certified professional will ensure that you are able to achieve your body contouring goals.