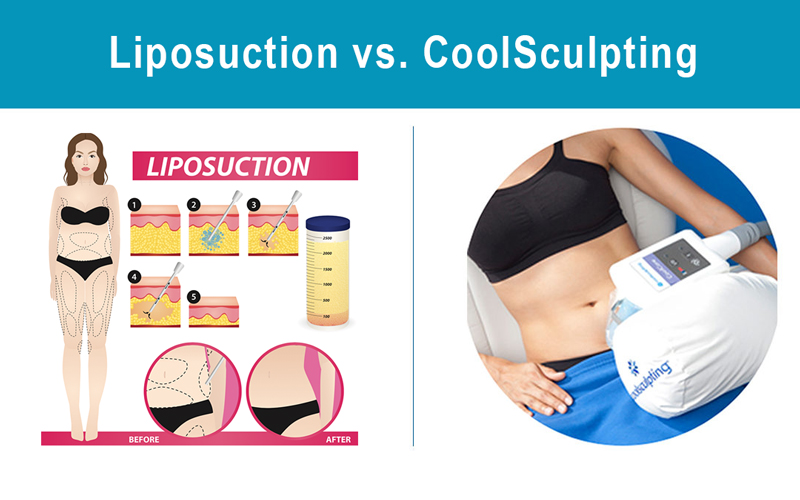 Due to the lockdowns and shelter-in-place orders enforced during the pandemic, people have been staying at home more than usual. In a recent study conducted by Epic Health Research Network, it was discovered that 39% of 15 million patients recorded weight gain higher than the usual yearly fluctuations in their electronic health records.

As a result, a lot of people have been looking for ways to lose extra weight. Aside from the usual diet and exercise, many turn to cosmetic surgeries such as liposuction and CoolSculpting. What is liposuction? What is CoolSculpting? What is the difference between the two? Which is better?

The Main Difference: Liposuction vs CoolSculpting 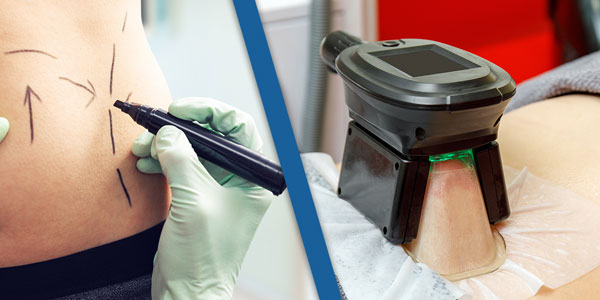 Liposuction focuses on the removal of large areas of fat through invasive means. On the other hand, CoolSculpting is a non-surgical procedure used to remove smaller areas of fat.

Liposuction and CoolSculpting are both cosmetic treatments used to remove body fat. Although both Liposuction and CoolSculpting are proven methods of eliminating body fat, the procedures have significant differences. This article lays down the differences between the two treatments as to the procedure, body area coverage, recovery time, effectiveness, results, side effects, and other pertinent information.

Liposuction focuses on the removal of large areas of fat through invasive means. On the other hand, CoolSculpting is a non-surgical procedure used to remove smaller areas of fat.

Liposuction vs. Coolsculpting: Understanding the Differences in Depth 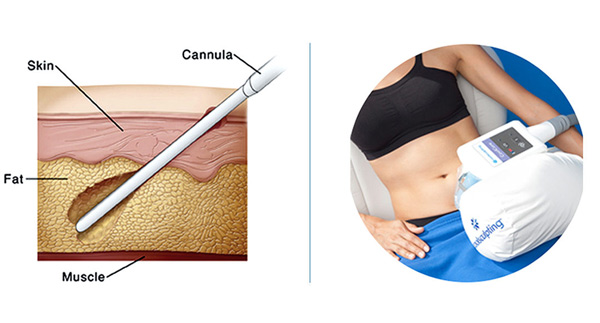 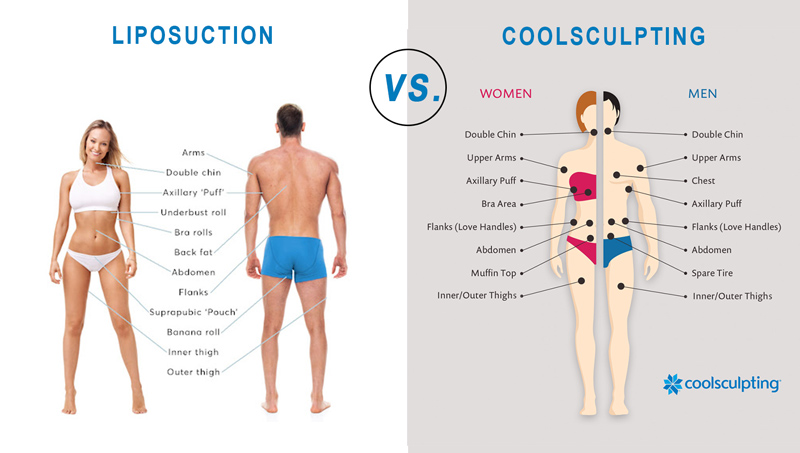 Liposuction is an invasive procedure aimed to remove large areas of fat. Also known as body contouring and lipoplasty, liposuction is used to remove fat from the face, neck, chest, arms, abdomen, waist, hips, buttocks, thighs, knees, and lower legs. The patient would need to be put under either general or local anesthesia. Afterward, the surgeon creates an incision in the desired location and uses a small suction called cannula to remove the targeted fat. The procedure lasts a few hours depending on the area and the amount of fat to be removed.

On the other hand, CoolSculpting is a non-invasive treatment used to remove smaller areas of fat, specifically subcutaneous fat. It is typically used to remove fat in the abdomen, hips, thighs, and lower back.

Utilizing cryolipolysis technology, the procedure involves the use of a tool that exposes the targeted fat to freezing temperatures. As a result of the treatment, the body eliminates the frozen fat naturally through the liver weeks after treatment. As compared to liposuction, the procedure typically lasts for an hour per targeted area. Moreover, no anesthesia is needed.

Reports show that the typical cost of liposuction is around $3,500 sans the anesthesia cost and other relevant hospital fees. On the other hand, CoolSculpting is around $2,000 to $4,000 per session. As mentioned earlier, CoolSculpting requires several trips to your doctor.

Patients who were given general anesthesia during the liposuction surgery may spend a day in the hospital. Meanwhile, those who were just given local anesthesia can go home immediately after the operation. Because liposuction is an invasive surgery, recovery time can last up to a week after the procedure.

On the other hand, patients who underwent the CoolSculpting procedure can immediately return to their normal activities right after the treatment. 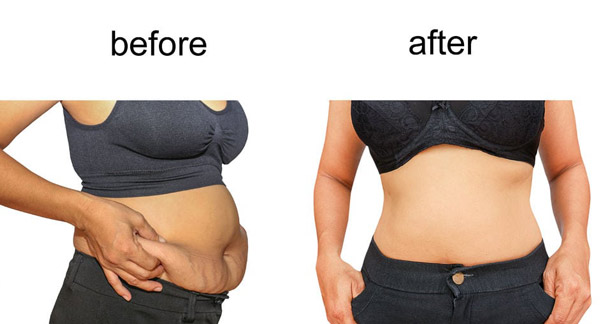 After liposuction, patients experience numbness, bruising, swelling, and discoloration of the targeted area, which may take weeks to months to disappear. Moreover, some patients are given prescription painkillers to manage the pain. There is also a risk of infection as with most invasive surgeries.

For CoolSculpting, patients are expected to experience numbness, redness, tenderness, and swelling over the targeted area. The side effects are considerably less as opposed to those experienced after liposuction.

On the other hand, with CoolSculpting, it may take around three weeks to two months before the results are seen as the body would still need to naturally eliminate the frozen body fat through the liver. Studies show that the body continues to excrete the fat cells even up to six months after the treatment. Several sessions are also needed for better effectiveness. 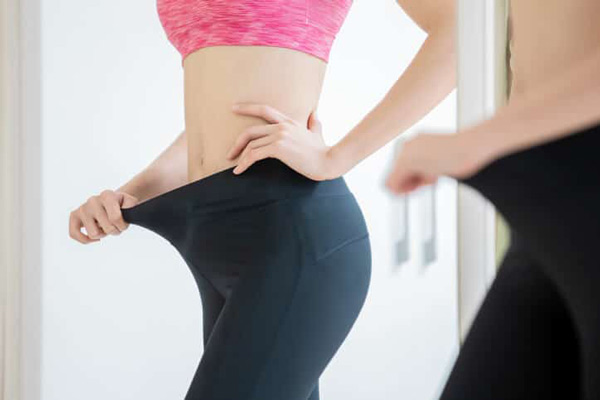 The fats removed from the body are permanently gone. However, weight and fat can be gained back without proper diet and exercise. The new fat cells may be redistributed to other parts of the body.

The results of the CoolSculpt treatment also last permanently. But as with liposuction, weight and fat can be gained back. 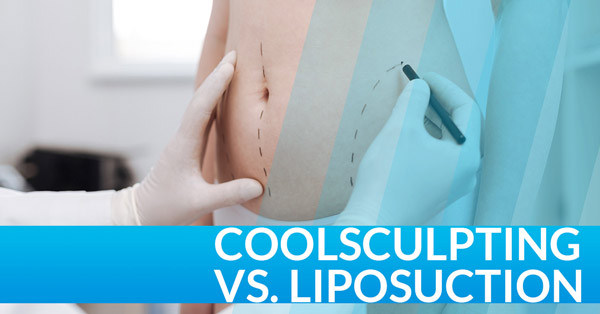 There is an increased risk with liposuction as it is an invasive procedure. Because it is a surgery, the risks range from infection to anesthesia complications to death. On the other hand, the risks for CoolSculpt are very minimal. It does not require any anesthesia, cutting, suturing, or stitching the body. 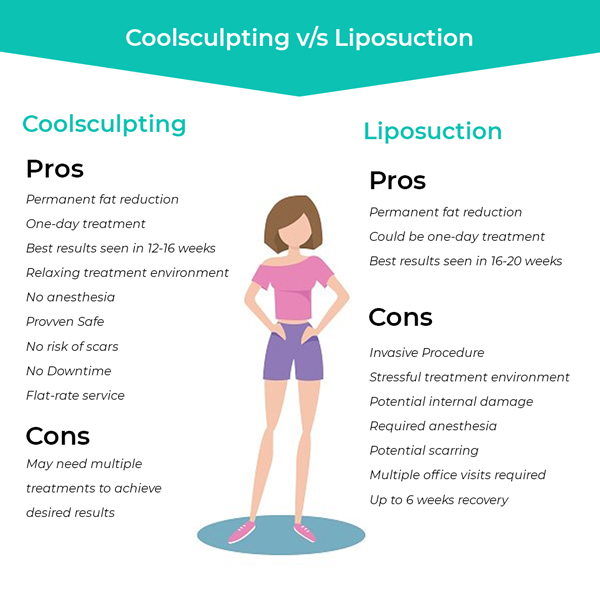 The advantage of liposuction is that it is usually a one-time procedure. It is also designed to remove larger areas of fat. There is also an option to transplant the fat collected to another area of the body for better body proportions. However, as earlier stated, it can be risky.

On the other hand, CoolSculpt is a safer procedure that targets smaller areas of fats. However, it requires several sessions and is a bit costlier overall.

Who Is a Candidate? 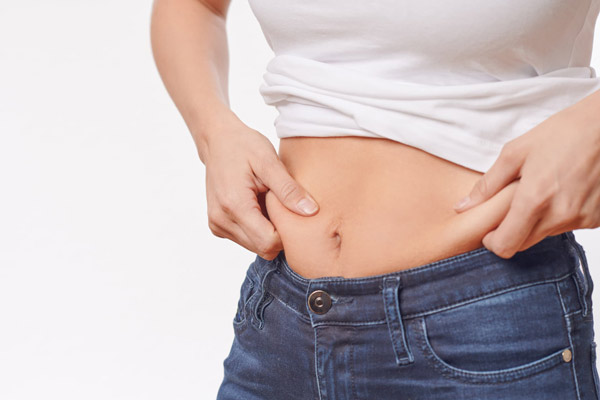 According to the American Society of Plastic Surgeons, a candidate for liposuction must be the following:

It should also be noted that liposuction is often resorted to when the body no longer responds to traditional weight loss methods like diet and exercise.

For CoolSculpting, a candidate must be the following:

Are They Covered by Insurance?

Which Is Better: Liposuction or CoolSculpting?

The type of procedure largely depends on the needs and condition of the patient. Liposuction is more suitable for removing large areas of extra fat. In contrast, CoolSculpting is more useful for eliminating small areas of fat. Removing fats from the belly and flanks is the most general use of CoolSculpting. It is important to always consult with a doctor before undergoing any medical procedure. It is also important to always practice healthy living coupled with diet and exercise. 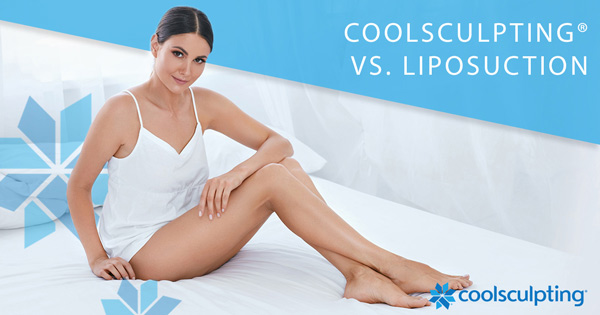 In conclusion, liposuction is a one-time invasive procedure designed to remove larger portions of fat. It usually involves general or local anesthesia, which may or may not require an overnight stay at the hospital. A patient may experience an array of side effects after the procedure, and downtime is usually a few weeks. The results are noticeable immediately after the swelling subsides.

On the other hand, CoolSculpting is a non-invasive procedure that requires several sessions. The main target of the treatment is small portions of fat. Patients may immediately return to their normal activities after the procedure and side effects are very minimal.